I’ve had a few conversations with founders lately about Cash Flow positive and Break Even points, and I realize there is often some confusion about what these two terms actually mean. Many times a founder will plot out his cash flows and assume his break even point is when these flows start trending positive.  But that’s not Break Even, the Break Even point is when the company has turned a sufficient cumulative profit (or more specifically, the cumulative cash) to cover the initial investment.  The Cash Flows are simply the “difference on monthly basis” (1st derivative) of the cumulative cash,  ie, the change in your monthly bank statement.

Although the topic is a relatively simple one, I think it would help to look at these concepts visually.  The diagram below shows the relationships between cumulative cash, cash flows, cash flow positive, break even, and investments. 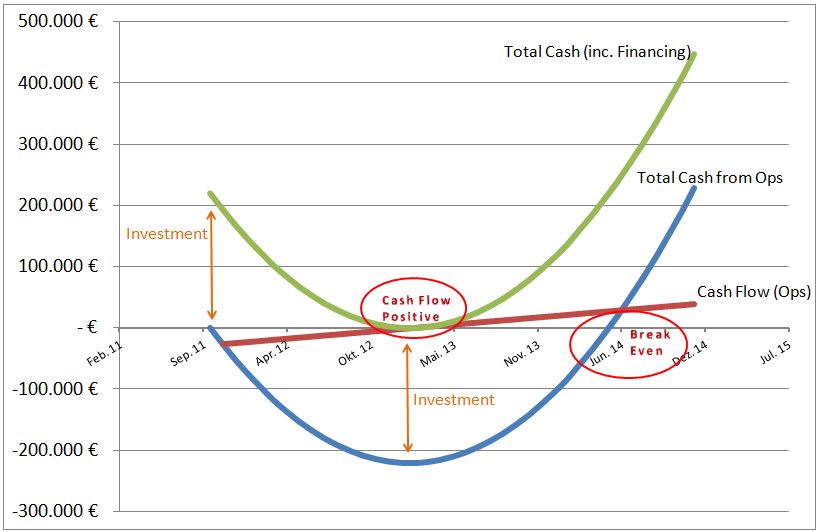 Let’s start with the monthly cash flow, since that’s what we  look at to see how quickly the company is burning cash in the early stages.  As we discussed in the last post, the cash flow is the cash basis (as opposed to GAAP or accrual basis) of money coming in and going out of the company. The net cash flow is simply the total of all cash transactions for that month. For this discussion I’ve further used the SAAS example from the earlier post. While unrealistic, we’re assuming the product is ready to launch immediately and that a few people are immediately ready to pay, and that costs are remaining constant.  The product gets launch in October 2011 and there’s barely any revenue. The total cash flow for that month is about minus 40T€.  The next month costs remain the same but a few more people use the product, so there is more revenue (assuming they pay in the month they use the product) and total cash flow is a bit shallower, now maybe minus 37T€.  Next month same story, but more users, so about negative 34T€.  In this example this continues in a more or less linear fashion (no hockey stick – for simplicity) for the next year, until the estimated 40T€ in monthly costs start becoming more and more covered by the monthly revenue, until around the end of 2012 when they equal each other.  As monthly revenue minus monthly costs reach zero, the company has achieved a very significant milestone of cash flow positive (which means it can basically survive even if there are no further investments and can begin plowing revenues back into the company to further spur growth).

At this point every euro the company earns is considered a profit (on a monthly basis). However, this is not break even! NPV and time value of money make the calculations a bit trickier, but basically if the company hasn’t generated the same amount of cash as the original investment, they are still just paying back the original investment.  The blue line of the diagram represents the sum of all the cash flows. For you calculus minded, this would be the integral function of the cash flows; while the cash flows represent the derivative function of the cumulative cash.  As the cash flows turn positive, the cumulative cash stops going deeper into negative and begins to turn around (inflection point), just as we’d expect of a company who is suddenly no longer burning thru the investment each month but instead beginning to pay it down. Once it is paid (when the blue line is at zero again), then the company has finally hit break even.   (This happens here at about three years after the investment, which for a low-cost company as in this example is quite a long time.  This is when it would be nice to see the hockey stick from revenues, in which case break even would be hit much faster.)

Since it is not possible to have a negative bank balance (without debt or some sort)- since that makes the company insolvent the total cash on hand is actually the sum of the cash flows plus the investment. What investment is needed? Quite simply, just look at the deepest point in the cumulative cash curve. What does it take to bump that above zero? That’s your investment target, giving you the green curve, which is the total cash including financing.  (In this example the needed cash was about 230T€, keeping in line with the earlier posts’ assumptions).

Now I’ve kept this example intentionally simple so that we could look at the graph without a lot of complex curves. In reality, there are a few things which will greatly complicate how your cash flow planning looks: