Network Effects are defined as a network becoming more useful the larger it grows. The classical example is the telephone: how useful is it if you are the only one that has it? And how useful if everyone does?

Networking effects are great for startups.  Virality can be achieved by making existing users want to invite their friends, since they receive more benefit if their friends join as well.  Social networks are the modern example of this – they become more useful as more friends join. 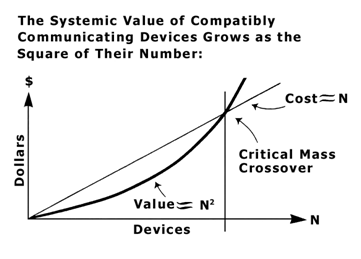 But all networks have to first reach a point where it is worth it for someone new to join, some form of critical mass that incentivize users outside of the early-adopters to join. This value is defined as the point where the cost of joining is less than the value of the network. It’s important to include the user’s time as a cost here as well.  The startup can lower the number of users/devices to reach the critical mass point in two ways:

1. Keep the “cost” per ‘N’ (download) as low as possible, in order to lower the critical mass point

In the simplest form this means to make the “transaction” (going to a website, registering for a service, downloading an app, etc) as frictionless as possible.

2. Maximize the value of the network (the N^x curve) as early and quickly as possible:

Improving this metric can be much more difficult, especially over the short term.  Value can be added to the user by both the features (independent of number of users) and by the network effect (fully dependent on the number of users).  Both are necessary: without features you won’t get the early-adopters and without the large number of users you won’t get the mass public involved, regardless of how good the features are (and it becomes a niche product).  So the trick is to setup the product so that there is at least a bare minimum in value to the early adopters and then try to grow to a critical mass as quickly as possible.

The critical mass point itself can be hacked a bit, by making the total population of available users smaller.  Let’s say your app has a great use for students.  There are currently ca. 120 million university students in the world.  If the critical mass crossover were to be at roughly half of that, you would need somehow to convince (at great cost) 60 million early adopters to get involved with your product.  But by bringing the total population down through some targeting (only ivy league university students, only Texas students, only Florida students, etc) you lower the crossover threshold dramatically. It may still be 50% (or whatever it turns out to be in your market), but that no longer is 60 million early adopters but only 200,000 or so.

Interestingly, this “total universe of users” can have an upper limit per user.   According to the Dunbar number, the maximum “useable” relationships for humans is about 150.  The number of close relationships is less and the number of loose relationships can be more, but this Dunbar Number throughout history has consistently been the maximum number of realistically useful relationships a human can hold.  The implication is that for most social networks (which are based on human relationships – that’s the “social” part) have decreasing marginal benefit after N > 150.  Beyond that, the features become important again as the network finds ways to be beneficial for even looser connections.